Twisted-pair copper cabling continues to be the predominant media in the horizontal LAN infrastructure for connecting and powering devices at the edge of the network—for everything from Wi-Fi access points and surveillance cameras to LED lights and digital displays. Still, no one can deny the ever-increasing role of fiber optic cabling as the primary media for LAN backbone infrastructure and data center links to transmit and process increased data at higher speeds. But that doesn’t mean that fiber isn’t making moving into the horizontal and on its way to becoming the mainstay of the connected world—and that’s getting easier than ever before.

First of all, the cost of optical transceivers has decreased significantly over the past two decades. While still more expensive than copper on the active equipment side, the cost associated with deploying fiber continues to go down. Not only is the cabling cost for fiber on par with copper, but advancements in both pre-terminated (like the HDReadyLink and HDReadyPull) and field termination solutions (like the Corning OptiSnap), make fiber easier to install than ever before. Unlike copper, fiber is also immune to electromagnetic and radio-frequency interference (EMI/RFI) and the corrosive impact of temperature changes and weather, and it’s actually more durable and able to withstand greater pulling force and pressure. Plus, fiber cable is smaller and much lighter weight, meaning it requires less rack, pathway, and inventory space, which saves cost and technically makes it a greener option.

But the real reason it is becoming the mainstay is its bandwidth and reach!

Providing Uplink Capacity for Every Business

Within all networks today, fiber optic cabling is required to handle the rising amount of data from more devices. With the average user now owning anywhere from 8 to 12 personal devices and enterprise businesses moving towards full digitization with everything connected, the amount of data needing transmit across networks has grown tenfold. It’s now estimated that there will be 75 billion IoT devices globally by 2025 generating about 463 exabytes (EB) each day. To put that in perspective, 1 EB is equivalent to 1 billion gigabytes (GB)!

While the amount of data on an enterprise LAN has a lot to do with the type of business, most organizations today are migrating to backbone speeds well above 10 gigabytes per second (Gb/s). Companies that generate the largest amounts of data such as financial, healthcare, tech, entertainment/media, retail, insurance, and educational entities are deploying backbone LAN speeds that reach 100 Gb/s.

Think about this: industry standards specifically recommend a minimum of a 25 Gb/s capable backbone to achieve maximum throughput for Wi-Fi 6 access points (WAPs) serving users on a single floor of an average enterprise building. Since copper twisted-pair cabling tops out at 10 Gb/s, only fiber can provide the capacity to carry data from those users to the data center. And once in the data center, it takes even more bandwidth to transmit data from multiple users and devices across multiple floors out to the internet. Facebook alone has about a million GB of data moving in and out of their data centers each day, and they don’t even hold a candle to Amazon! The unlimited bandwidth capability of fiber also means it has greater longevity to support generation after generation of network upgrades, which also makes it more sustainable (something on the radar of most organizations today as part of their environmental initiatives).

Going the Distance to Connect the World 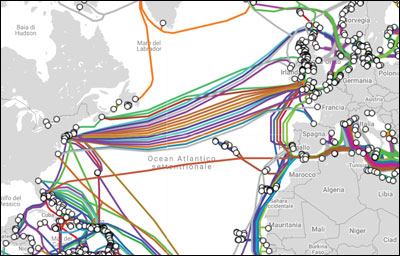 In addition to supporting more bandwidth, fiber can transmit data much farther distances that copper. A single strand of singlemode fiber for example can transmit up to 400 Gb/s of data to 40 kilometers using wave division multiplexing (WDM) technology. Development is even underway within IEEE (802.3cw) for singlemode dense WDM applications to support 400 Gb/s to 80 kilometers—that’s about 50 miles!

Due to its reach, fiber is naturally what connects buildings, communities, cities, and continents. Did you know that there is more than 4,000 miles (about 6,500 kilometers) of fiber cables containing millions of strands that run across the Atlantic from Virginia Beach to Balboa, Spain weighing in at more than 10 million pounds and able to stream 4 million high-definition (HD) movies through one strand, in one direction? And that’s just one of the trans-Atlantic links shown in this map!

Because copper can only reach 100 meters (about the length of a football stadium), we’re also seeing it deployed in the horizontal LAN to connect the growing number of edge devices (WAPs, cameras, access control, etc.) that need to connect in remote locations and large spaces like parking garages, warehouses, and arenas/convention centers.

Moving Ever Closer to the Edge

While fiber is clearly the mainstay for LAN backbone links, connections in data centers, and to connect the entire world, it’s also starting to move ever closer to the edge—especially in some key vertical markets.

While some vertical markets are deploying more fiber in the horizontal infrastructure than others, the reality is that more devices are being connected to support everything from HD video streaming, online gaming, and virtual/augmented realty to emerging IoT/IIoT and 5G technologies like advanced data analytics, artificial intelligence, and machine learning. To process all of that data for real-time response versus sending it all the way back to cloud data centers, smaller high-density purpose-built edge data centers are popping up in more places. This includes on-premises locations like industrial and manufacturing sites, regional 5G macro-cellular sites, or even on a municipality street corner for processing smart traffic information—any location where lots of data is collected and processed. With the rise of edge data centers, fiber is extending closer to users and devices across all industries.

The good news is that CablesPlus offers a complete line of multimode and singlemode fiber optic cables rated for a wide range of environments—from the LAN and the data center to outside plant, military tactical, mining, and broadcast applications. And we’ve got the connectivity, tools, and accessories you need to deploy it. Click HERE to view our breadth of fiber connectivity solutions or contact us at sales@cablesplususa.com or 866-678-5852 to discuss your fiber network needs.