Local area networks primarily use category balanced four-pair copper Ethernet cabling in their horizontal infrastructure to connect wireless access points, laptops, phones, surveillance cameras, and a variety of other connected devices and peripherals. Category 3 cable was ratified as the first official “category” by the Telecommunications Industry Association (TIA) in 1991 with the ability to support 10 Megabits per second (Mb/s). While Cat3 remains as an installed base in some LANs for voice, category cabling has significantly advanced over the past two decades.
To support today’s networking requirements, organizations today primarily choose between Cat5e, Cat6, and Cat6A depending on their application, budget, and future proofing requirements. When it comes to selecting the right category cabling, it’s important to understand the key differences in these cabling types and how their performance correlates to application needs. Let’s take a look at the differences to help you make the right selection.

As technology advanced and networking speeds increased, TIA ratified Cat5 cabling 1995, which operated at 100 MHz and supported 100 Mb/s. While this was adequate for supporting devices like phones and computers at the time, technology advanced so quickly with the growth of the Internet that Cat5 was replaced just a few years later with Cat5e—an “enhanced” Category 5 cabling. Also operating at 100 MHz, Cat5e offers better crosstalk performance than Cat5.
Crosstalk between pairs in a cable happens when a signal transmitted on one pair creates interferes with the signal on another pair, potentially creating bit errors or preventing data transmission. Crosstalk is measured as near end crosstalk (NEXT), which measure crosstalk at the source end of the link, and as far-end crosstalk (FEXT), which measures crosstalk at the far end. When testing cables, NEXT and FEXT is measured on each pair as a sum of the crosstalk from the other three pairs in the cable (i.e., power sum crosstalk). To reduce crosstalk, cabling manufacturers use different twist rates on each pair, which prevents them from picking up signals from adjacent pairs. Manufacturers have gotten better at this over time, which is why Cat5e that operates at the same 100 MHz frequency as the previous Cat5 is able to support gigabit speeds (1000 Mb/s).

In 2002, TIA ratified Cat6 cabling as the next category offering slightly more bandwidth. The primary difference compared to Cat5e is that Cat6 is designed to operate at a frequency of 250 MHz to process more data. It also has even more stringent requirements for crosstalk and other performance factors like insertion loss and return loss. With a higher operating frequency and less noise interference, Cat6 offers greater headroom for better performance in Gigabit applications.
Due to improved manufacturing and better twist rates, some Cat6 cables can support up to 10 Gb/s over a limited distance. However, for the most part, Cat6  is considered to be just slightly better than Cat5e. In fact, both Cat5e and Cat6 cable plants can be qualified to support 2.5 or 5 Gb/s, which are common speeds for supporting 802.11ac Wi-Fi 5. The 2.5/5GBASE-T application (IEEE 802.3bz) was specifically developed in 2018 for this application and to extend the life of the installed based of Cat5e and Cat6 cables.

Not the Latest, But Certainly the Greatest

With Cat5e and Cat6 not able to keep up with bandwidth requirements and the need for greater transmission speeds, cable manufacturers introduced Cat6A capable of supporting 10 Gb/s. This was especially beneficial in data centers where server speeds needed to increase to support emerging applications. Ratified in 2009, Cat6A cabling operates to a frequency of 500 MHz and has additional and tighter pair twists for better crosstalk. It also features added insulation to reduce alien crosstalk—the interference from pairs in neighboring cable, not just within a cable—which was not a concern at lower operating frequencies. With its ability to support 10 Gigabit applications, Cat6A is the optimal choice for businesses and larger companies—TIA specifically recommends Cat6A for all new deployments and future proofing. Cat6A provides enhanced performance for power over Ethernet (PoE) and the bandwidth to support applications like high-definition video and the latest IEEE 802.11ax Wi-Fi 6 that offers a theoretical maximum data rate of 9.61 Gb/s.

In 2016, TIA ratified Cat8 cabling to support 25 and 40 Gb/s speeds in short-reach 30-meter data center links. While Cat8 is technically the latest category cabling, it never gained any market share due to cost, lack of active equipment, and higher power consumption. Most data center links needing to support greater than 10 Gb/s speeds instead use optical fiber or short-reach SFP and QSFP direct attach cable assemblies.

From Shield to Slim 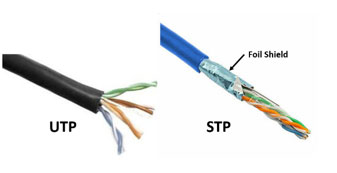 Cat5e, Cat6, and Cat6A cables are available in unshielded (UTP) and shielded (STP). Shielded cables are constructed with a  metal shield that surrounds all four pairs of the cable. While shielded cabling carries a higher premium and slightly increased installation cost, it is ideal for any environment subject to electromagnetic interference (EMI) that can impact signal integrity. For that reason, shielded cabling is recommended for healthcare and industrial facilities. In addition to EMI protection, shielded construction helps keeps signal transmission from radiating out of the cable, which improves security, provides better alien crosstalk performance, and reduces heat dissipation in PoE deployments. 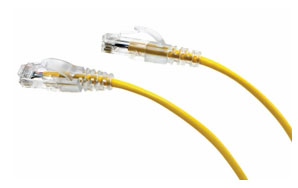 For patching applications, Cat5e, Cat6, and Cat6A patch cords are also available in slim construction. Built using smaller 28 AWG stranded conductors, slim patch cords are ideal for high-density patching areas. The smaller overall diameter reduces congestion and offers a smaller bend radius. This can also help improve airflow in and around active equipment. It’s important to note however that 28 AWG patch cords have more resistance and higher insertion loss, which is why TIA specifies a derating factor of 1.95. This reduces the typical 10 meters of patch cords in a 100-meter channel to 6 meters for an overall channel length of 96 meters.

The good news is that the CablesPlus USA is your number one destination for Cat5e, Cat6, and Cat6A Ethernet cables—both unshielded and shielded constructions. We carry bulk Ethernet cable and patch cords (including slim 28 AWG options) for end-to-end networking connections—from the switch to the desktop. If you’d like to talk through your specific application and environment for guidance in choosing the right category Ethernet cable, we can do that too! just contact us at sales@cablesplususa.com or 866-678-5852.