What are MPO Connectors?

Originally introduced for ribbon fiber to reduce splicing time in FTTX and data center applications, MPO connectors use a linear array of fibers in a single ferrule rather than using multiple duplex connectors. They come in male (with pins) and female (without pins) for proper mating and alignment and feature a “key” and a white dot to denote the first fiber position, which aids in ensuring proper polarity where each transmit fiber lines up with its receive fiber.

With more fibers packed into a small footprint, these connectors have been ideal for keeping up with fiber density in the data center. Using MPO-to-LC cassettes, these pre-terminated connectors allowed for fast, easy connections between patch panels in duplex applications, essentially giving rise to modern-day plug-and-play fiber systems. When the industry moved to parallel optic applications to support faster uplink speeds of 40 and 100 Gig via more lanes, MPOs became the de facto interface, and as these applications evolved and grew in popularity, so did the MPO.

IEEE developments in encoding technology has enabled transmitting at 25 Gb/s per lane, the 100GBASE-SR4 application was introduced as a replacement for 100GBASE-SR10, bringing the fiber count for 100 Gig down to 8 by transmitting 25 Gb/s over 4 fibers and receiving at 25 Gb/s over four fibers. As the 8-fiber 40 and 100 Gig applications took off, the MPO-8 connector was introduced with the same form factor as the MPO-12 but eliminating the unused four fibers. However, MPO-12 connectors remain popular in some enterprise data centers as an efficient means of supporting six duplex fiber channels while still enabling migration to higher-speed 8-fiber applications. 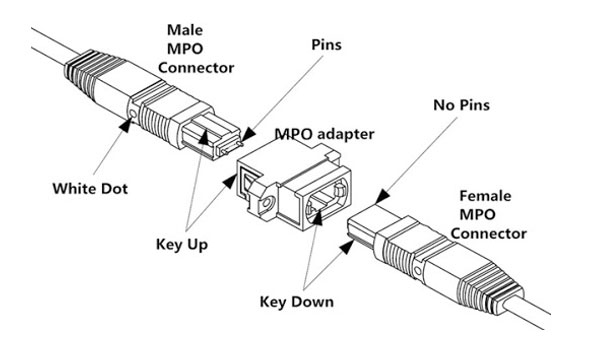 What is the Difference Between MPO and MTP?

Over time, MPO connectors have also improved in their overall geometry, performance, and reliability. Through precision manufacturing and geometry control, these connectors have become far more uniform and accurate in fiber protrusion height and angle of polish across all fibers in the array and must meet stringent parameters to be compliant with industry standards. This has enabled a better insertion loss and reflectance performance, which was critical for supporting higher-speed parallel optics applications that have much more stringent loss requirements.

In addition, manufacturers like US Conec further improved performance with their patented MTP® version of the MPO with tighter design tolerances that offers improved alignment and durability. The difference between the MTP and the MPO has caused some confusion since the terms are often used interchangeably. Essentially, the MTP is a type of MPO. In other words, all MTPs are MPOs, but not all MPOs are MTPs.

How will MPOs Support Emerging 400 Gigabit and Beyond?

Fast forward to today where several advancements in fiber transmission are now supporting speeds of 400 and 800 Gigabit, with 1.6 and 3.2 TB on the horizon. As explained in our article, “ With fiber’s future set in stone, innovation solves data center challenges” that appeared in Cabling Installation & Maintenance magazine, encoding technology has advanced to support 50 Gb/s lanes, with 100 Gb/s lane expected soon. What does that mean from an application perspective?

Well, if 100 Gig is supported using an MPO-8/12 connector with 8 fibers transmitting and receiving at 25 Gb/s, that means we will easily support 400 Gig over 8 fibers transmitting and receiving at 100 Gb/s using the same interface. In the interim, 400 Gig is already being deployed using current 25 and 50 Gb/s lane technology over 32 or 16 fibers. As a result, the MPO-16 and MPO-32 connectors are gaining ground in the data center. MPO-24 connectors will also support 16-fiber applications, but with 8 fibers not used, they will not be the connector of choice going forward. Note that by combining parallel optics with short-wave division multiplexing that uses two different wavelengths on each fiber, 400 Gig can also be supported with MPO-8/12 connectors via 400GBASE-SR4.2. 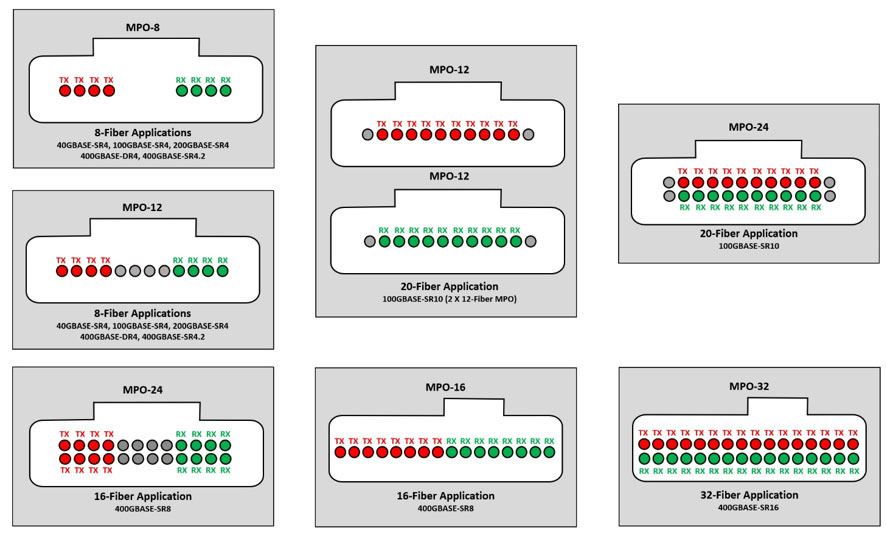 Once an 800 Gig MAC rate is figured out within standards bodies, early 800 Gig deployments will also make use of 50 Gb/s lane technology over 32 fibers using the MPO-32. When 100 Gb/s lane signaling becomes available, 800 Gig will be supported by MPO-16 connectors. And it doesn’t stop there. Hyperscale data center players like Google, Facebook, Microsoft, and others are already driving innovation for 1.6 TB and 3.2TB speeds. Current development efforts include a new transceiver module interface with 16 lanes to support 1.6 TB, transmitting and receiving at 100 Gb/s over 32 fibers, which will potentially further drive the use of MPO-32 connectors. It’s important to note that standards bodies are also working toward 200 Gb/s lane signaling technology that will eventually get us to 3.2 TB over 32 fibers, while enabling 1.6 TB with an MPO-16 and 800 Gig with an MPO-8/12. While we likely won’t see this technology for at least another five years, it clearly shows that MPOs are here to stay.

And the good news is that our high-density HD8² ultra-high density system uses high-performance elite MTP connectors for our MPO solutions in whichever fiber count you need for your application—8, 12, 16, 24, or 32.

Stay tuned for an upcoming blog where we will delve more into how current connector technologies can effectively be leveraged 400 Gig applications.If you'd like to talk through your specific application or for guidance, we can do that too! just contact us at sales@cablesplususa.com or 866-678-5852