Multi-fiber push-on (MPO) connectors like the US Conec MTP® Elite designed for exceptional low-loss performance have become a mainstay in the data center for today’s high-density, high-speed parallel optics applications that use multiple transmitters and receivers to spread a single stream of over multiple fibers. MTP cables available with 8, 12, 16, 24, or 32 fibers to support speeds of 40 to 400 Gig with each fiber transmitting or receiving at 10, 25, 50, or 100 Gb/s. MTP connectors are even geared up to support 800 Gig, with initial deployments among cloud data center providers leveraging 100 Gb/s lane technology over 16 fibers with 16-fiber MTPs. With new advancements in technology, data center owners and operators can now tackle fiber polarity and density like a pro!

In every fiber application, polarity defines how light signals transmit to ensure that transmit signal at one end of channel corresponds to the receiver at the other end. Without proper polarity, the data signal will not flow. In 2-fiber duplex applications, maintaining polarity is pretty straightforward—the transmit on one end connects to the receiver at the other end and vice versa in the other direction. But things can get a bit tricky in MTP parallel optics applications with multiple transmitters and receivers all needing to correspond correctly. 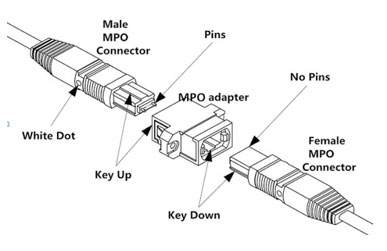 Furthermore, as explained in a previous blog and shown in the drawing, MTP connectors come in male (with pins) and female (without pins) for proper mating and alignment, with the MTP interface on active equipment almost always being male and hence requiring a female connector at each end of the channel. MTP connectors also feature a “key” and a white dot to denote the first fiber position, which aids in ensuring proper polarity where each transmit fiber lines up with its receive fiber.

Types of Polarity Methods and Components

Polarity with MTP fiber channels is especially tricky because there are multiple methods defined by industry standards. In 2020, TIA augmented the TIA-568.3 Optical Fiber Cabling and Components Standard with Technical Services Bulletin TSB-5069 that provides guidelines for ensuring polarity and defines three different methods—Method A, Method B, and Method C. Each method uses Type A, Type B, or Type C MTP components, or a combination thereof. Let’s explain.

Type B components on the other hand are reversed, meaning that the fiber in the first position at one end lines up with the last position at the other end. For a 12-fiber MTP Type B patch cord or trunk for example, Fiber 1 of the MTP at one end corresponds to Fiber 12 of the MTP at the other ends, and Fiber 12 corresponds to Fiber 1. To create this reversed connection, the MTPs both ends are in the key-up position, as shown below.

In a parallel optics channel, Fiber 1 (Receive) ultimately needs to correspond to Fiber 12 (Transmit). In Method A that uses a Type A trunk cable for the permanent link and creates a straight-through (i.e., 1 to 1, 12 to 12) connection, a Type B patch cord must be used on one end to reverse the fiber so that Fiber 1 can correspond to Fiber 12. With Method B that uses a Type B trunk cable for the permanent link and reverses the fibers, there is no need to use anything but Type B components throughout the entire channel. In Method C, that uses a Type C trunk cable with the crossover, the reversal of the pairs makes it very difficult to ensure that Fiber 1 (Receive) corresponds to Fiber 12 (Transmit) in a parallel optics application, so this method is not recommended for these applications. Type C components however can be used as a permanent link in a duplex application where the 12-fiber MTP transition to six duplex LC connectors for example, but Type C components today are hard to come by. 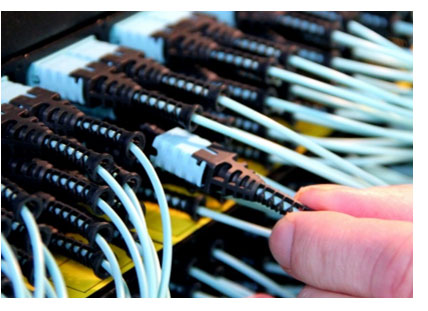 Another key consideration in today’s MTP fiber deployments is density. As data-hungry application capacity demand continues to grow, data centers today are striving to get more connections into their existing space to avoid build-outs and reduce cost. But when you have 96 MTP connections in a single rack unit, getting your fingers into a patch panel to plug or unplug connections without impacting critical adjacent connections can be difficult and creates the potential for downtime of fiber links during reconfigurations. And with all that fiber coming out of just one rack unit, enabling proper cable management and airflow to optimize performance can also be tricky.

The Way the Pros Do It

As you can see, polarity and density make for more complex data center deployments. While it’s recommended to select a polarity method and stick with it throughout the entire network, that doesn’t always happen. Many data center environments are mix of both Method A and Method B, with some even having all three. When you have multiple methods in the same data center combined with the fact that MTP fiber patch cords pretty much all look the same and it can be tough to remember how the components in each method need to go together, it’s quite common to end up using the wrong patch cord—such as a Method A patch cord where there should be Method B patch cord and vice versa. The result is a non-functioning connection. And remember—active equipment almost always features a male port, so you also need to make sure that the MTP at each end is female connector.

Thankfully there’s a solution the pros use to avoid being stuck with the wrong type of patch cord in a channel and possibly having to reorder and delay the time it takes to get your equipment up and running—the MTP Elite Pro! This innovative version of the MTP lets you change component polarity on the fly. It’s really quite genius—and easy in just one step! You simply insert the connector into the tool to change polarity from Type A to Type B or from Type B to Type A. It’s important to note that polarity of singlemode MTP Elite Pro connectors cannot be changed because the angled APC end face used in singlemode makes polarity more complicated and can’t be supported with field polarity change.

Using the pin gripper tool and exchangers that come with the tool, you can also change the gender on both multimode and singlemode MTPs (in case you messed that up too!). When changing from male to female, the exchanger without pins is used. When changing back to male, the pin exchanger with pins is used. The tool even stores the exchangers, which come in aqua for multimode and yellow for singlemode. And in case you were wondering, MTP Elite Pro connectors are interoperable so they can mate with any other MPO—not just another MTP Elite Pro.

To further reduce complexity in the data center, the MTP Elite Pro also comes with a push-pull boot to make it easy to plug and unplug connections in high-density patching environments. That means there is no need to shove your fingers between connectors to unplug a cord—you just grab ahold of the boot and give it a little push. And to ease cable management, reduce pathway congestion, and allow for better airflow, leading fiber connectivity vendors have reduced the cable diameter of MTP patch cords. In fact, the 8- and 12-fiber MTP patch cables available with our HD8² High-Density Fiber Optic Solution combine the best of the best—the MTP Elite Pro push-pull boot with just a 2.0 mm diameter cable.
So what does it all mean for you? If you have the wrong polarity component or gender needed to build your channel and you use MTP Elite Pro connectors, you no longer have to reorder the right component and deal with lead times that delay your network going live—you can just change the polarity and gender yourself. And your patching areas are easier to access, easier to manage, and less congested—all of which translates to uptime and performance!

The good news is that CablesPlus offers a complete line of MTP Elite Pro fiber patch cords and MTP Elite Pro to duplex fan-out cables with field polarity changeability, push-pull boot, and smaller diameter so you can join the elite who know how to tackle fiber polarity and density like a pro. And we even offer the polarity/pin removal tool and a kit with the tool, extra pin exchangers, and an MTP cleaner. And if you’re looking for any other fiber components, click HERE to view our breadth of fiber connectivity solutions or contact us at sales@cablesplususa.com or 866-678-5852 to discuss your fiber network needs.