In last month’s blogs, we covered new high-density duplex connectors like Senko’s CS™ and SN™ connectors US Conec’s MDC™ and the role of MPO connectors on the road to 800 Gig and beyond. But did you know that duplex and MPO connectors can be strategically combined to support cost-effective 100, 200 and 400 Gig break-out applications while still putting you on the right migration path to 800 Gig?

There are currently several options for using duplex fiber connectivity in data center applications beyond 10 Gig. For multimode SR applications popular in enterprise data centers, duplex connectors like the standard LC support 25 and 50 Gig 100m connections, which are ideal for switch-to-server connections in end-of-row and middle-of-row deployments. Duplex connectors will also support multimode 100 Gig BiDi connections commonly used in switch-to-switch links, such as between leaf and spine switches.

As we highlighted in our blog on MPOs, current 8- and 16-fiber parallel optics applications are supported with MPO-8 and MPO-16 connectors (or MPO-12 and MPO-24 connectors) for both multimode and singlemode. The following table highlights these MPO applications.

While MPOs will continue to be deployed to support applications from 40 to 400 Gig, few enterprise data centers are implementing 200 or 400 Gig links. Instead, these applications are being leveraged to support multiple 25 or 50 Gig server breakout connections from a single switch port—and that means you need both MPO and duplex connectivity. Let’s take 400GBASE-SR8 for example. Based on 50 Gb/s signaling, this application is ideal for enterprise data centers to leverage a single 400 Gig switch port and break out to eight 50 Gig servers using MPO-16 to LC fiber assemblies.

When it comes to larger data centers (i.e., clouds and colos), 8-fiber 200 Gig based on 50 Gb/s and 400 Gig based on 100 Gb/s signaling is ideal for 4X50 Gig or 4X100 Gib break-out application in both switch-to-server and switch-to-switch links. As 800 Gig comes to fruition based on 100 Gb/s signaling over 8 lanes using MPO-16 connectors, larger data centers will break out a single 800 Gig port as 8X100, further optimizing a single port for server connections.
What are the advantages of port breakout?

To create these break-out links, data centers have a few options. Point-to-point connections using break-out direct attach cables (DACs) such as a 100 Gig QSFP28 to 4X SFP28 DAC for a 4X25 Gig implementation are one option. However, this solution is extremely limited by very short distances (<10m) and is therefore more suitable for connections within a single rack. In contrast, to achieve greater distances between switches and support end-of-row and middle-of-row configurations for switch-to-server links, hybrid fan-out cables such as an MPO-8 to 4 duplex connectors or MPO-to-duplex cassettes are the better option.

While both options are viable, fan-out cables can create congestion and be difficult to reconfigure in more complex environments. Plus, if there’s a problem with the cable, four connections need to come off-line. MPO-to-duplex cassettes however support structured cabling and offer greater flexibility and reconfigurations at patching areas—if a switch port goes down, a server that needs to be up and running can easily be swapped to another switch port via duplex fiber jumpers at the front of the panel.

One disadvantage of typical MPO-to-duplex cassettes is insertion loss associated with both the MPO and duplex connector. But that’s not an issue with our HD8² CS ultra-high density system!  Our HD8² includes the option for assembles that integrated the cassette and trunk where the multi-fiber cable coming into the rear of the cassette terminated directly to the duplex ports, eliminating the MPO insertion loss associated with typical cassettes. 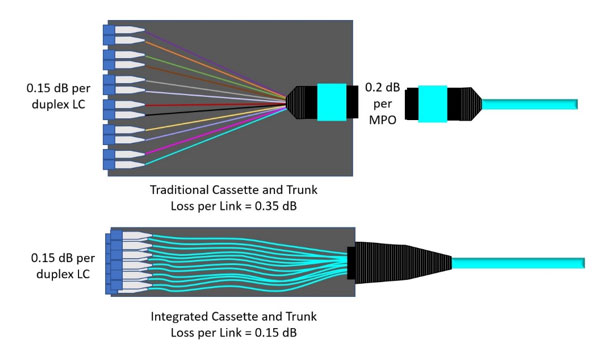 You can read all about this technology and compare insertion loss results by downloading our HD8² vs. Traditional Plug-and-Play Performance Study. And if you want to know more and try it for yourself, just contact us at sales@cablesplususa.com or 866-678-5852.

Stay tuned for our next blog where we will delve more into considerations for break-out configurations where duplex small-form factor SN and MDC connectors have their sweet spot.

If you'd like to talk through your specific application or for guidance, we can do that too! Just contact us at sales@cablesplususa.com or 866-678-5852