Perhaps you've heard of Senko's CS™ and SN™ connector, or US Conec's MDC™. But how do these new duplex connectors which are based on the same 1.25mm ferule used in today's LC connectors, compare to the LC and what is their market viability? In this blog, we'll tell you what you need to know.

The Senko CS and SN Connectors

Introduced in 2018 by leading manufacturer Senko to replace LC connectors, the CS connector offers 40% higher density compared to the LC. In a CS connector, the two fibers are spaced at just 3.8mm in a 7.85mm X 5.3mm housing. In comparison, a traditional LC spaces the two fibers at 6.25mm in a 13mm X 10.7mm housing. This essentially means double the density with two CS connectors in a single transceiver and up to 144 duplex ports (288 fibers) in the highest-density patch panels like our HD8² CS ultra high density system. Even the highest density option for the LC taps out at 96 duplex ports in most manufactured 1U patch panels.

If you are wondering how difficult it is to access such a small connector in that dense of an application, Senko has addressed that concern with a push/pull tab that is available in four different sizes—up to 69mm—for quick and easy insertion and removal. With an insertion loss of less than 0.2dB, the performance of the CS also exceed the LC with a typical loss of 0.25dB.

As if the CS wasn't small enough, Senko has also introduced an even smaller interface with its SN duplex connector with vertically positioned fibers spaced at a 3.1mm for a total connector housing of just 3.75mm wide. That means up to four SN connectors in a single transceiver and up to 192 duplex ports (384 fibers) in a 1U patch panel. Both the SN and CS connectors are designed to be available in OM4 and OM5 multimode, as well as single mode UPC and APC varieties, and they enable easy polarity change in the field. 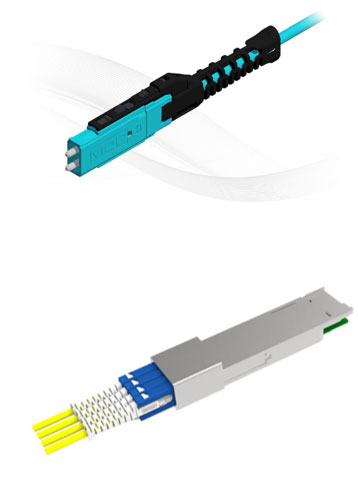 As with any technology development comes competition, so naturally US Conec (known for the MTP connector) unveiled its new EliMENT™ brand MDC small form-factor duplex connector just a year after the Senko CS.

Vertically positioned like the CS, the MDC offers three times the density over LC connectors to also support four duplex connections in a single transceiver and up to 216 ports (432 fibers) in a 1U HD8² ultra-high-density patch panel . It also offers easy access in high density environments using a simple push/pull boot and quick polarity reversal.

Where and How Will They Be Used?

Due to their smaller size and ability to support 2 or 4 duplex connections in a single transceiver interface , CS, SN and MDC connectors are especially well suited for high-speed 200/400 Gig break-out applications such as 2 X 100 Gig and 4 X 100 Gig. Since these next-generation speeds are primarily being deployed in hyperscale and cloud data centers, that's where they are currently being deployed. But as enterprise data centers realize the benefit of reduced cost per port that comes with breaking out a single 400 Gig port to multiple lower-speed ports, they'll start to show up there as well.

To support these applications, Senko and US Conec also offer multiple adapters, including 2-, 3- and 4-port adapter that fit into the same panel cutout defined for LC and other adapters. And as they've done with their other connectors (like the MTP), Senko and US Conec offer licensing to connectivity providers, making it easy for data center customers to purchase ultra high-density patch panels to support these new connector interfaces.

In fact, out patch cords and ultra high-density  HD8² system cassettes are now available with Senko CS and the US Conec MDC. And if you're looking for SN connectivity solutions, we can do that too—just contact us at sales@cablesplususa.com or 866-678-5852.

Stay tuned for an upcoming blog where we will delve more into the specific applications and deployment options for these new high-density duplex connectors!