The Complete Guide to Media Converters

But did you know that media converters can be used for converting other signal types in different environments? Let’s take a look at how these simple devices work, the various types available, and how to choose what’s best for your network.

How Do They Work? 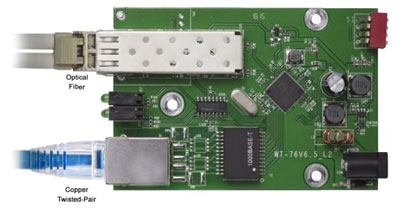 To convert signals between dissimilar media, media converters feature standardized interfaces that match the media types being converted and internal electronics that do the conversion. It’s important to note that a media converter is almost always a two-way street—it converts signals in either direction. Depending on their functionality, some media converters require a separate power supply, either local or distributed.

Unlike an Ethernet switch that determines the destination address for a data signal using Carrier Sense, Multiple Access with Collision Detection (CSMA/CD), media converters are typically Layer 1 devices. If you look at the OSI networking model, residing at the physical Layer 1 means that a media converter is invisible to data traffic and does not deal with any protocols. In this most basic form, a Layer 1 media converter simply converts signals.

There are however some smart media converters that can be considered Layer 2 devices because they support management protocols, TP port configuration, VLANs, and auto-negotiation. 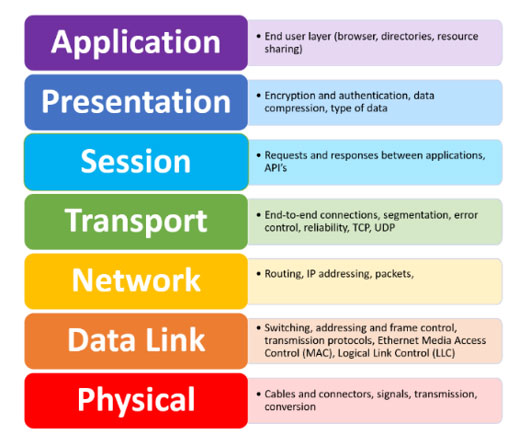 For example, RS-232 full-duplex serial signals that were once widely used for connecting computers to printers before USB connectivity came on the scene are still used in a variety of applications, especially in industrial and operations technology (OT) environments. RS-232 allows for short-reach one-to-one communication and is often used by programmable logic controllers (PLCs) to talk to other PLCs, motor controllers, drives, human-machine interface displays, or other automation devices. Other signals often used in industrial and OT environments include longer-reach RS-485 and RS-422 that support one-to-many communications in a bus configuration. RS-485 and RS-422 signals are similar, with the main difference being that RS-422 is full-duplex and RS-485 is half-duplex. That means RS-422 can transmit data bidirectionally at the same time, while RS-485 can only transmit data in either direction at one time.

In industrial and OT networks, there is often a need to convert from RS-232 to RS-485/RS-422 and vice versa to extend distances, support bus topologies, and accommodate diverse device-to-device communication. There may also be the need to convert these serial signals to Ethernet signals—either electrical or optical. So in addition to traditional copper-to-fiber Ethernet converters, you may also see RS-485/RS-422 or RS-232 to Ethernet. 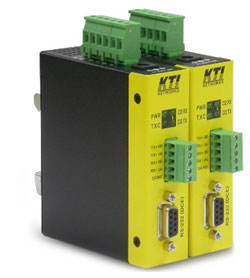 When it comes to selecting a media converter, primarily you need to know what type of media and signals you’re converting. With Ethernet conversion, you also need to know the speed, application, and interface. Because a media converter should not interrupt data flow, it must support the application associated with the signal. For example, if the data is being transmitted at gigabit speeds, the media converter needs to support that speed. Autonegotiation is a feature to look for in Ethernet conversion, meaning that the media converter identifies and adjusts to support multiple speeds such as 10/100/1000BASE-T. When converting from twisted-pair copper cabling to fiber cabling, you also need to be aware of your fiber type—multimode or singlemode—and your connector interface. Media converters are available with LC, ST, and SC style fiber connectors.

meaning they can withstand dust and vibration. Industrial media converters are also often DIN-Rail mounted for mounting within control cabinets.

Media converters can also be grouped together in a media converter chassis for mounting in a standard 19-inch rack. These systems can be AC or DC powered and support a variety of converter types. While they can be unmanaged, it makes more sense to choose a managed system when dealing with multiple converters in a chassis. Managed media converters are especially ideal for mission-critical applications. Using management protocols like SNMP, managed media converters offer features such as remote monitoring, fault detection, security, and testing. Some will even include alarm relays for reporting downed links or power failure.

The good news is that Cables Plus USA offer a wide range of media converters—from industrial DIN-rail mounted RS-232 to RS-485/RS422 converters, to commercial copper to fiber Ethernet converters in a variety of speeds and deployment options. Click HERE to view our breadth of media converters or contact us at sales@cablesplususa.com or 866-678-5852 for help choosing the right solution for your media conversion needs.