Which Network Transceiver Do I Need?

Pluggable transceivers support various network speeds and transmission technologies, they are compatible with a variety of active network equipment, and they offer the benefit of easy plug-and-play deployment and replacement to facilitate upgrades. Pluggable transceivers also feature common copper and fiber connector interfaces to serve as the interface between active equipment and the cabling infrastructure. This supports the use of structured cabling in data center, LAN, and WAN networks that provides a standards-based, organized infrastructure that’s cost-effective, easy to manage, and highly scalable.

Transceiver form factors (size and shape) have gotten much smaller over the past two decades to support high-density data center deployments—the smaller the form factor, the more switch ports can fit into a single 1U space. For example, first-generation 1 Gig GBIC (gigabit interface converter) form factor transceivers are rapidly being replaced with SFP (small form factor pluggable) transceivers (also referred to as mini-GBIC transceivers) that are about half the size. Similarly, XENPAK transceivers first introduced for 10 Gig applications in the early 2000's are largely being pushed out of the market by compact SFP+ and XFP transceivers.

While density requirements have many now choosing new smaller form factor transceivers, there are some considerations when it comes to selecting the one that’s right for your network. 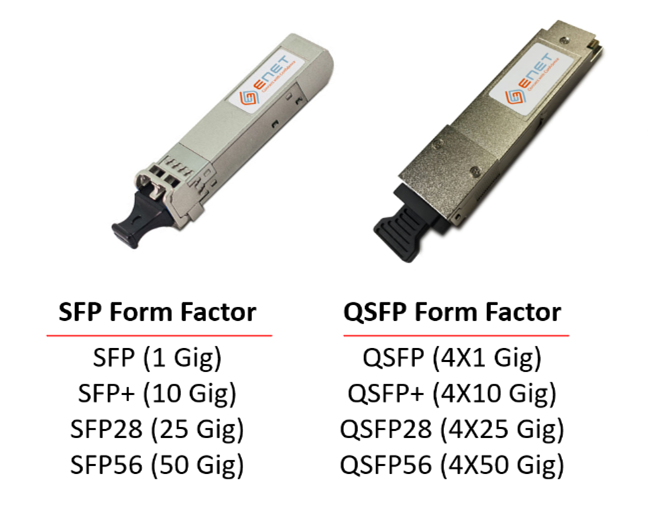 When it comes to choosing a transceiver, you need to know what application you are supporting. Transceivers can support copper twisted-pair applications up to 10 Gig (i.e., 10/100/1000BASE-T or 10GBASE-T), or they can support multimode and singlemode fiber applications up to 400 Gig, including duplex, WDM and bi-directional, and parallel optic applications. The internal circuitry of the transceiver will vary based on the application. In other words, a 4-lane QSFP+ transceiver that supports a parallel optic multimode application like 40GBASE-SR4 with 4 fibers transmitting and 4 receiving at 10 Gb/s will have vastly different internal functionality compared to one that supports a 4-lane WDM singlemode application like 40GBASE-LR4 where signals are multiplexed/demultiplexed for sending and receiving over four different wavelengths.

Of course, once you know your application, you also need to consider the connector interface of your cabling infrastructure. Transceivers that support twisted-pair copper applications like 1000BASE-T and 10GBASE-T will all use the common RJ-45 interface. Parallel optics applications that transmit and receive over multiple fibers use multi-fiber push-on (MPO) connectors, while duplex, bi-directional, and WDM applications that require just one or two fibers need simplex or duplex connectors, such as LC or SC connectors. There are also transceivers becoming available that support newer very small form factor connectors like Senko’s SN and US Conec’s MDC duplex connectors and development is underway to develop transceivers that support Senko’s new SN-MT mini MPO connectors.

Another consideration is equipment. You want to make sure your transceivers are compatible with whichever vendor’s switches you’re planning to deploy—whether that’s Cisco, Cisco Meraki, Dell, Extreme, HP, Juniper, or Ruckus/Brocade. While the transceiver doesn’t need to come from the original equipment manufacturer (OEM), you want to choose transceivers that are guaranteed compatible with identical functionality to OEM products.

The good news is that Cables Plus offer a wide range of LightWave transceivers—including GBIC, XFP, SFP and QSFP form factors—for today’s most popular twisted-pair copper and optical fiber applications, connector interfaces, and switch vendors. And our LightWave-branded transceivers guarantee compatibility and reliability with industry-leading lifetime replacement warranty and technical support. Still unsure about which transceiver you need? Just contact us at sales@cablesplususa.com or 866-678-5852 for guidance.